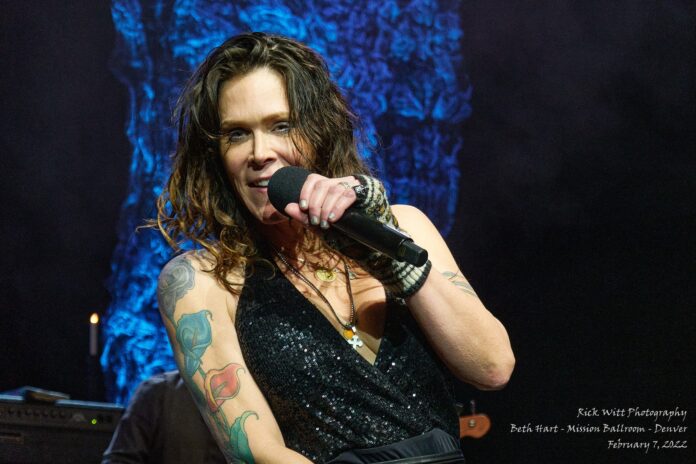 I’ve been a fan of Hart’s work for years.  But it wasn’t until I saw her perform live for the first time, back in April of 2019, that I fell in love with her as an artist.  That night I witnessed a power I’d really never seen before.  An artist connecting with every member of the audience, as if she were singing/talking to them individually.  Raw, honest and sincere – Hart completely blew me away.

She did it again last night. In a show originally scheduled for April of 2020, that’s been cancelled and rescheduled twice due to COVID, Hart made the wait worthwhile.  Performing at Denver’s Mission Ballroom, which wasn’t even open the last time Hart performed in Denver, she gave the audience all they bargained for and more.

Hart has one of the most extraordinary voices in blues rock music today.  Her range is exceptional, purportedly four octaves.  But it’s not just her talent that sets her apart from her contemporaries.  A Beth Hart concert is an emotional journey.  Her lyrics speak of life’s challenges and struggles, of battles won and lost, reaching emotional depths that are clearly communicated through her performances. She performs from the heart, and in so doing reaches members of the audience in ways few, if any, other performers can.

Last night’s set started with Hart solo on the piano, offering a heartfelt thank you to the audience for coming out to see her and the band.  While most artists like to start their shows with a bang, Hart started hers quietly.  But then the band joined her, and they launched into a blistering version of “When The Levee Breaks”, from her upcoming Led Zeppelin tribute album (scheduled for release on February 25).  Soft and emotional, transitioning to pounding and powerful.  It’s exactly what Hart fans come to see, and it’s exactly what she delivers.

Between fan favorites like “Tell Her You Belong to Me”, “Baddest Blues”, and the title tune from her 2020 album “War in My Mind”, Hart took breaks to talk to the audience, sharing back stories about the origins of many of the songs being performed, and what her own life journey has been like.

A particular highlight of this evening’s set was when the members of the band set up at the front of the stage for a series of slower songs.  Guitarist Jon Nichols and Hart both grabbed acoustics, while drummer Bill Ransom set up behind a minimalist percussion kit, and bassist Tom Lilly grabbed a standup bass.  This group has played together for a long time, and their affection and respect for each other shows in their performances.

A Beth Hart performance wouldn’t be complete without the Etta James cover “I’d Rather Go Blind”.  On this night this was the band’s encore number.  I never grow tired of hearing Hart sing this song. It’s the first song I every heard her sing, and one I hope she continues to include in her live performances as long as she’s doing them.

Hart is truly one of a kind.  As a person who’s been to countless concerts, I can say that without hesitation.  If you missed her on this night, you missed something special.  When the opportunity comes to see her next time, I highly encourage you to make every effort to see her.  She’ll break your heart, but you’ll feel really, really good about it.