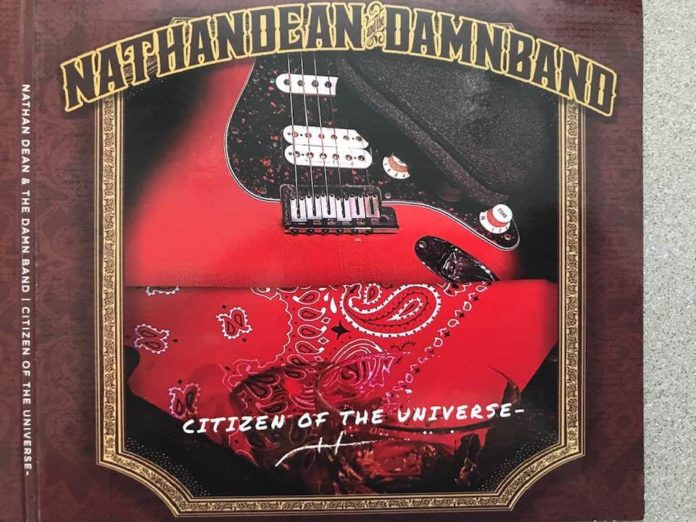 Nathan Dean & The Damn Band is a country band based out of Arizona. Featuring Nathan Dean on vocals and guitars, Bill Bogan on drums, Nick Miranda III on bass, keyboards and background vocals, and Jason Judd on lead guitar, ND&TDB has put out a new release called Citizen Of The Universe, an album dedicated to Tracy Jacobs and Larry D.

Track 1, Cheap Liquor, is just the type of partying and drinking song that ND&TDB’s fans have come to love and expect. Naming brand names of liquor to connect memories, Dean sings about talking about old times. Some people drink to remember and others drink to forget. Cheap Liquor is a song about remembering good times, and maybe a few bad ones, and all the different drinks that helped to fuel those memories. This song is Honky Tonk approved.

2. From Me To You, written by Nathan Dean

Track 2 starts “Another day, another dollar, If you want something in this life, just grab it by the collar”. Nathan Dean slows this one down and begins tugging at your heart. From Me To You is filled with words and wisdom, handed down from Dad to Son. Sometimes people need guidance, and, luckily, singers and songwriters are able to share their life and their thoughts through their songs. Take it step by step. Maybe you think the grass is greener, but cultivate and tend to your own creation until it’s your own, perfect view.

Track 3, When I’m Gone, is a pause and reflect song. Dean digs deep and gives us a powerful message about what happens with a legend and a legacy. It goes through the joys in this world, a few things that won’t get done, and then asking God to let them finish their life’s project, giving a daughter away at her wedding, before taking them from Earth.

Track 4, One More Bender, is a drinking song and a story that you’re going to relate to. When you hear, “I’m gonna feel wrong in the morning, tonight I’m gonna feel right”, you know you’re in for a night of bad decision-making, or rather, I’m going to deal with my problems tomorrow, tonight I’m getting my party on.

Track 5, Earth Lost An Angel, is another heart-string puller. Getting the news about losing an old friend, Dean’s country voice comes through on this awesome tune about seeing the spreading wings for a beautiful flight.

Check out a video of Earth Lost An Angel, taken at the Grizzly Rose;

6. Shit I Would, written by Nathan Dean

Track 6, Shit I Would, is a cautionary tale and a mostly true story, of picking up 9s and waking up with 3s. This fast moving, fast-talking tune adds some smiles to this country album.

Track 7, 2000 Miles, sends Nathan Dean and the Damn Band out on tour, putting miles on the bus and miles further away from home. Then the phone rings from home. It’s about missing home and the loved ones there that are waiting 100 days for the return. It’s a tough life on the road, but connections from home keep the wheels turning.

8. Under The Influence, written by Nathan Dean

Track 8, Under The Influence, is small town living. Dean sings about being under the influence of life and love, and moving away from the small town to find out what you love about it. Seeing the same people everyday. Watching those same people helping each other shapes who we are. “Love conquers hate everyday.”

Nathan Dean and the Damn Band put their country style to a traditional Folk song, Whiskey In The Jar. Beautifully arranged, ND&TDB the song about someone who is betrayed by his wife or lover. The song’s exact origins are unknown. Good spin.

The album ends with an acoustic version of Earth Lost An Angel. Just Nathan Dean and his guitar. Awesome.

Overall, Citizen Of The Universe, is an album where Nathan Dean and the Damn Band hold true to their drinking and partying ways, but also add more depth while touching on matters of the mind and heart. May all bands have enough road behind them to pause and reflect on where they’ve been, and also prepare them for where they’re headed. Well done, Nathan Dean and the Damn Band.