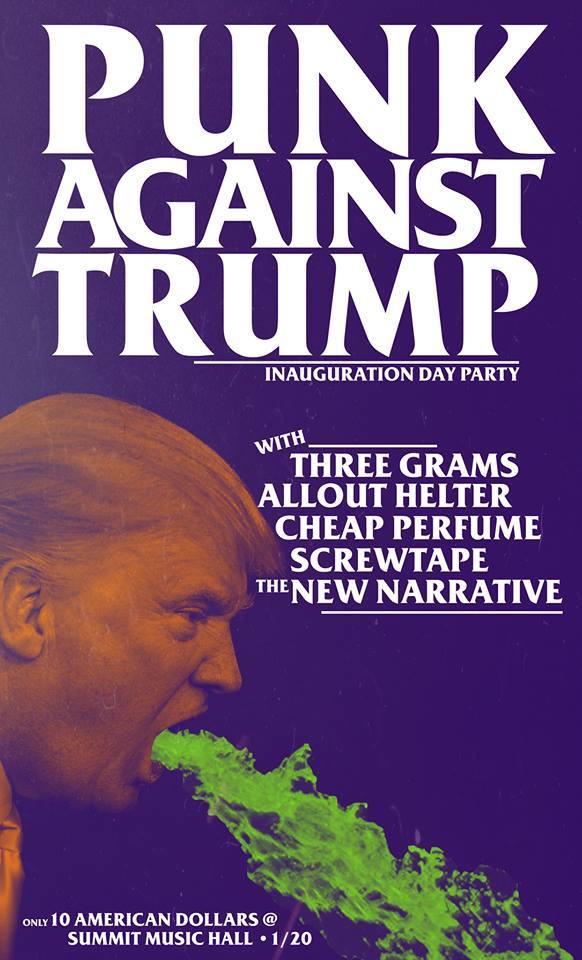 The right to assemble, while in the form of a rock concert is not a new concept. It is, however, the perfect opportunity to form a relevant musical form of protest in a tense political climate. On Inauguration Day, five local Denver bands are exercising their freedoms of speech with a rally of punk music, Punk Against Trump. Mile High Feedback spoke with Ross Swirling, a member of Allout Helter, who is performing at Summit Music Hall on January 20. “It’s still basically just a punk rock show, but it’s important,” explains Swirling. “We really do stand behind our ideals that we put into our music. We can do this together and make an impact.”

This all-ages show is a multi-functional way for those who share the same ideals to be together and still have a good time, on what many are anticipating to be a very frustrating day. However, Swirling stresses that this rally is not a form of opportunism to entice an audience to get to a show. “As much as this is an opportunity for us all to get together and to collectively bundle our energy; whether it’s anger, sadness, or frustration, it’s important to put our money where our mouth is.” And they are channeling that desire to give back with the proceeds of this event going to various organizations that will be, in his words, “fighting against the Trump agenda.”

Similarly, attending rallies or making individual direct donations to organizations that may fear funding losses, this is yet another way to support those causes. And Swirling hopes that this will be a continuation of the efforts that protestors and rally participants are already doing on that day. There is talk of movements that encourage taking the day off work, shutting down commerce and ignoring any and all media coverage of the inauguration itself.

The organizations that Punk Against Trump aims to support are close to heart for these musicians; Allout Helter specifically being a band that claims to write songs more from the socio-economic world view. Focusing more on lyrics that serve as a reflection of what’s going on, this event does offer a perfect forum to output their distaste yet allow a harboring effort of positive intent.

Swirling recalls growing up, “I would go to a lot of shows in DC or out in the ‘burbs, and there would always be at least one table like “Anti-Racist Action” or “Food not Bombs” always there, handing out pamphlets and trying to get people to sign up. I’d love to bring that back to shows in general, not just this one specifically.” Girls Rock Denver is listed as an organization that will be setting up booth to distribute information on their programs as well as Colorado Coalition for the Homeless who work on finding affordable housing for the community. Ross is also hoping that these types of outreach efforts are not limited to just this event, but expect to see booths and spokespeople at upcoming shows of bands similar to the ones playing at Punk Against Trump.

In addition to Allout Helter, veteran band Three Grams, well known for their stamp on the local punk map, organized the event along with Cheap Perfume bassist Geoff Brent through Soda Jerk Presents. Nicely rounding out the bill are the new and promising Screwtape and The New Narrative. What is the goal of the night and the mission that these bands hope to impress upon their audience? “I hope that people can think of this as a way to come together and show that we are not going to lie down in the face of all of this incoming racism, sexism, xenophobia, and other contempt for humanity.”

For More Information and Tickets: