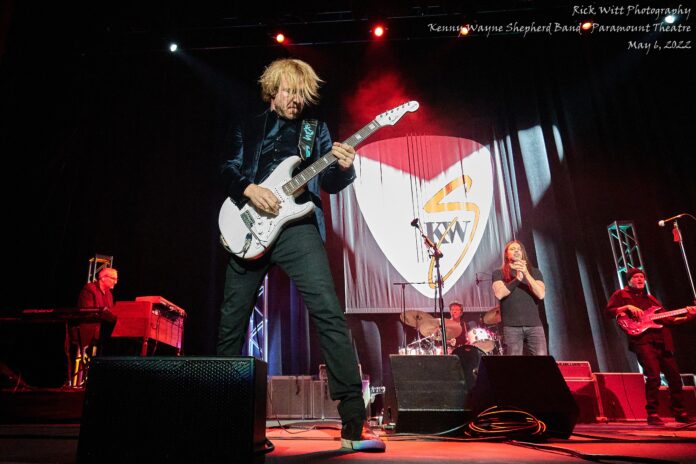 If you’re a young blues guitarist, and your debut album spends 20 weeks on the Billboard Blues Charts before eventually being certified platinum, what do you do for a follow up?  In the case of Kenny Wayne Shepherd, who was just 18 years old when he released his debut album Ledbetter Heights in 1995, you go one better.  You release Trouble Is…, his 1997 sophomore release that soared to number one on the blues charts, (it still holds the record for the longest stretch at number one), attained platinum status, and included four top ten hits, including what would eventually become his signature song, Blue On Black.

Fast forward a quarter of a century, to February of 2022.  Shepherd and crew have just launched their Trouble Is… 25th Anniversary Tour. For two nights last week, KWS brought that tour to fans along the front range of Colorado.  On Thursday, May 5, the band played at the Lincoln Center in Fort Collins.  On Friday, May 6, they played the Paramount Theatre in Denver. (They were scheduled to play the Pikes Peak Center in Colorado Springs on Saturday, but that show had to be postponed when the band was hit with a COVID outbreak.)

I had the privilege to attend and cover both shows, and this review (along with the accompanying photos) covers both nights.

Given the nature of this type of tour, it’s no surprise that there were no opening acts at either of the Colorado shows.  Instead, Kenny & Band performed two sets each night.  The first set included the entire Trouble Is… album, although it wasn’t played front to back.  Purists might have questioned that, but I will contend that it really didn’t matter.  This album is so packed with KWS classics – songs that are still staples of their live shows 25 years later – that the sequence didn’t matter a bit.

Shepherd is absolutely a bluesman, even though his music bleeds over into multiple genres. On stage, however, there’s no doubt about what he is… a straight-up rock star. He’s a photographer’s dream, prancing from one side of the stage to the other, posing in classic rock star fashion while his fingers perform magic on his guitar.  A case in point is the Hendrix cover I Don’t Live Today, where he got down on his knees in front of his amps and throttled the guitar, ala Hendrix himself, whipping the crowd into a frenzy. 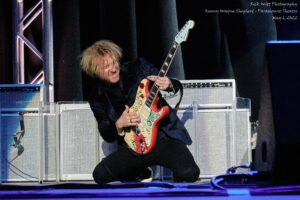 Regarding the crowds… the Fort Collins show was completely sold out; the Denver show was close, but not quite.  Both crowds were raucous, giving standing ovations between the majority of the individual songs.  Most of the shows I cover are in Denver, so I’m used to the enthusiasm of the local crowds. But I’ve really got to give it up to the folks at the Fort Collins show who were every bit the equal of those at the Denver show.

Shepherd’s band was exceptional, as usual.  The Denver show was missing sax player Joe Sublett and trumpet player Mark Pender due to illness.  That was unfortunate not only because they add so much texture to the songs, but because the Denver crowd didn’t get to see and hear Pender’s excellent harmonica solo on the song (Long) Gone.  On the other hand, the Fort Collins crowd did not see the same extended version of that song that the Denver crowd did.  At the Denver show, each of the members of the band took their turns at solos, beginning with Joe Krown on keyboards, then Kevin McCormick on bass, followed by Chris Layton on drums, before ultimately turning it back over to KWS for his solo turn.

For those of you who might not know, Layton is the former drummer for someone you might have heard of… Stevie Ray Vaughan.  The man known as “Whipper” was a founding member of the Double Trouble band and played with Vaughan until his death in 1990.  He’s been associated with Shepherd since the beginning of the latter’s musical career and has been a mainstay of the band for close to a decade and a half. He actually first met Shepherd with Kenny was just seven years old, at a show in Shreveport, LA, which Shepherd’s father, a concert promoter, presented.

And then there’s lead vocalist Noah Hunt, who has been with KWS since 1997.  In a sense, this anniversary tour is also Hunts, who joined the band for the Trouble Is… album and has been Shepherd’s right-hand man ever since.  Hunt has one of the best voices in the blues music business. And while he was obviously struggling for the Denver show, he pushed through, and whatever drop-off there might have been was hardly noticeable. Like Shepherd, he is a great showman who delights audiences when he holds his mike stand aloft, and while providing acoustic and electric guitar accompaniment. 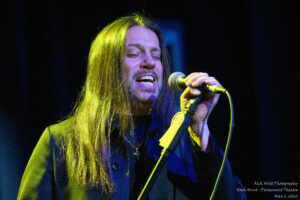 If you ask the people in attendance at either/both of the shows, they’ll likely tell you that the highlight of their respective evening was the aforementioned Blue on Black, which was performed toward the end of the Trouble Is… set.  Preceded by an extended introduction where Shepherd talked about the significance of that song to his career and the place it holds in the blues-rock world, it truly brought down both houses. And no wonder. The song spent more than 42 weeks on the Billboard Rock Chart when it was first released, ultimately winning the award for Rock Track of the Year.  The cover version of the song, released in 2019 by Five Finger Death Punch, featuring not only Shepherd but Brian May and Brantley Gilbert, soared to the top of the charts yet again.  It’s a timeless song and a staple of the band’s live shows for 25 years.  To this day it’s his most-listened-to song on Spotify, with over 26 million streams.

Two great nights… two great shows attended by both new and long-standing fans.  Fans are cross-generational like the mother and daughter I chatted with prior to the Ft. Collins show. They had just purchased “Blue on Black” t-shirts and were attending the show as a birthday gift to the daughter.  I might have mentioned that song… it’s kind of a big deal. 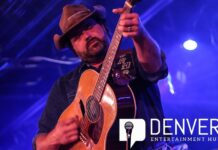