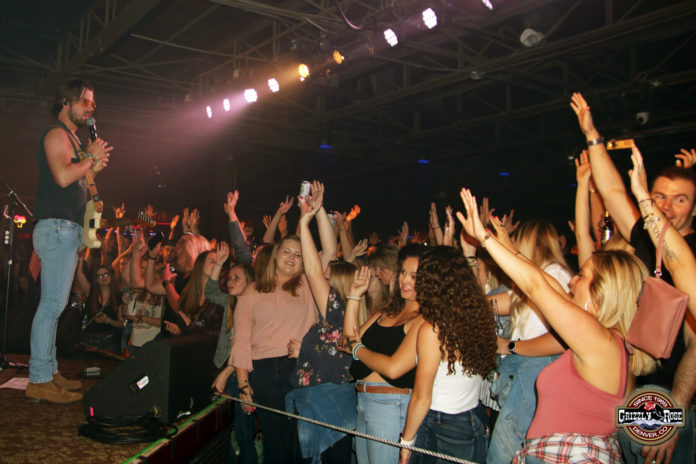 Triple Nickel band was back for concert night two to kick off headliner, Chase Bryant. They fired up the crowd and sang a good variety of old songs, new songs and their original songs! Check them out on their website at www.triplenickelband.com

The headliner, Chase Bryant, raised in Texas, lives in Nashville, defines himself as a nerd in school but said music has always been a part of him, music is everything. He’s inspired by his musical family, his grandfather played piano for artists like Roy Obinson and Waylon Jennings and his uncles co-founded the group Ricochet. Chase has killer guitar skills and excited the front row as he got close enough to let them touch and strum his guitar! He talked about his last year and a half, that he took some time away to reflect on life, he was engaged, now he’s not. Additionally, he said he let a little bit of fame get to him, but, as he told more stories to the fans, it sounds as though he’s back on track and wanted them to know he was definitely there to play C-O-U-N-T-R-Y (yes, he spelled it out!) music and none of the bro-country! He loves playing at the Grizzly Rose, and it showed! His setlist had the fans clapping and singing along to covers as well as his own songs; Thunder-Rolling-Stoned, Some Bar and Atlantic City started his 90 minutes, other songs included Country, Tush and Small Town. He ended the night with the fan favorite, Take It On Back, his top ten debut single. You can find the complete setlist below. Check out his website to keep up to date http://chasebryant.com

Photos courtesy of the Grizzly Rose.