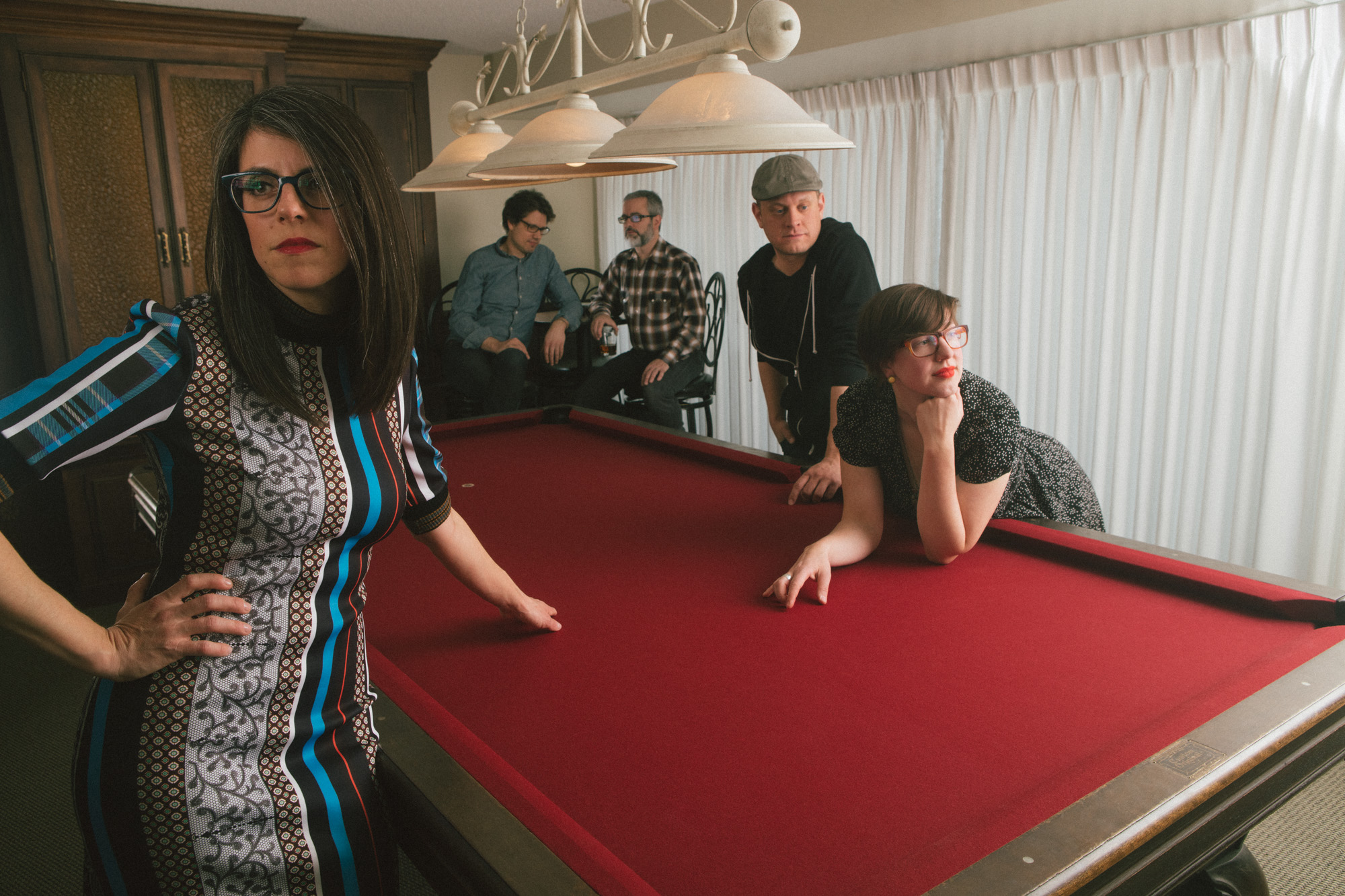 Automatic Iris is the Denver based rock band collective effort of co-founders Amanda Gonulsen and Michael Saul, who met in classes at Swallow Hill. Since the original formation, Glenn Hermanson, Courtney Wilson, and Ryan Elwood have been added to round out the all-hands-on-deck rock band. Performing the opening set at Hi Dive this week for SIR and Avifauna,  Amanda Gonulsen takes some time to tell us songwriting, how 2017 is taking shape, and what makes being in a Denver band so great.

Mile High Feedback: When did you start playing music and writing?

Amanda Gonulsen: Outside trying a couple of failed lessons in college, I remember starting to think about playing music around 2005. I noticed I was always singing when I was cleaning the house and figured… why not try to make a hobby out of it if I’m naturally doing it anyway. Fast forward thru the awesome Core Guitar Classes at Swallow Hill to a very special Swallow Hill class somewhere around 2008/9 when I met tons of friends, including Michael! On the first day of class, we all played music after class over beers. Michael and I played “Red Right Ankle” by the Decemberists together that night, and we basically never stopped playing. We both so much love to write, and it went from tinkering together to a full band.

MHF: What were some of the biggest influences that appear in your song writing?

AG: Michael and I both just love the story telling aspect of songwriting. Michael’s songs are so rich in character and place… I feel like I know the characters, and there are details of place or time that just make you emote. My songs often start with one small experience or image, then build off of that, sometimes exaggerating emotion past the point of being reasonable or sane. We both blur the line of autobiography and fiction in ways that feel interesting to us. I often hear Neil Young or Yo La Tengo in Micheal’s guitar lines. We try to weave stories and melodies for each band member, so Glenn with play a bass line that takes you back to New Wave. Or Courtney will play keys that make you think of The New Pornographers. I love writing vocal melodies that twist around and chase one another. Lucius does an amazing job at that. So, in some songs, I try to write melodies for Courtney and me to sing where you maybe can’t tell which line is lead.

MHF: Is songwriting something you continue to actively do outside of preparing to record an EP or album?

AG: Absolutely. Writing is maybe the most fun part, but the part that is most difficult to make time for. There is nothing more exciting and terrifying than trying out a new song at a show. Heck, even bringing new material to practice is scary. But that’s where the fun is.

MHF: With a few years of working together, what have you learned most about the dynamic of the group?

AG: It’s endless! I think the coolest part is getting to know what each person brings to the table, then writing and arranging around those strengths. When we started, Michael and I already had a handful of songs that the group molded around. But as we write new material, we can write for each person’s talents, and each member brings their personality to the story. It’s an endless process of discovering what we sound like together, and it feels as though the songs are getting more rich and focused as that happens. 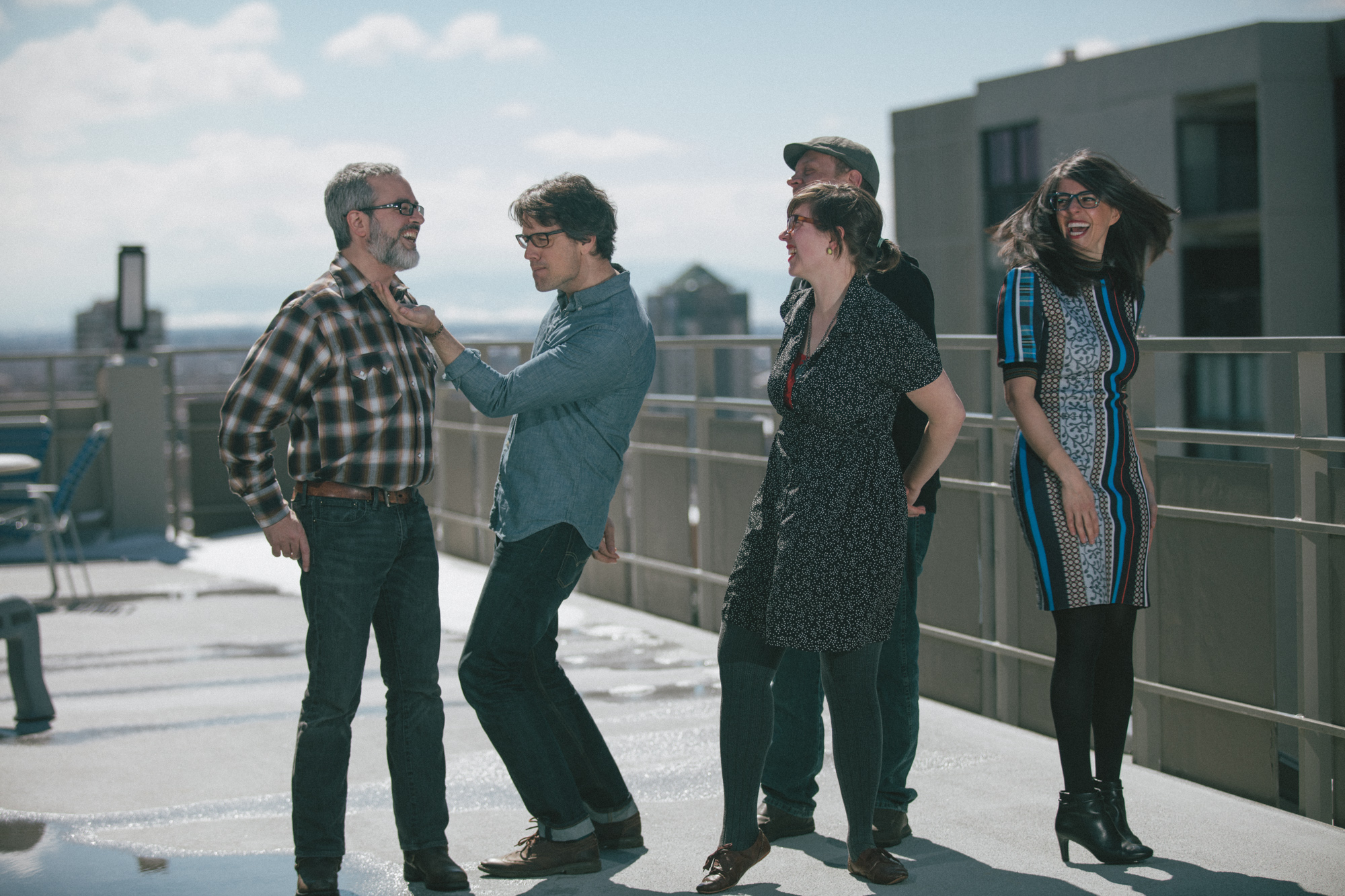 MHF: What is Automatic Iris looking forward to most this year?

AG: We are really excited to be working on releasing some new music! We are back at The Keep with Nick Sullivan recording some songs and are really looking forward to sharing those. We are focused on keeping variety in our shows. It makes it so exciting for us and gives us access to different audiences. We’ve got the Hi Dive coming up this week, but next month we’ll play an all ages, free show at Park Hill Library. We are looking forward to announcing some other exciting shows this Spring and Summer.

MHF: What are some of the most rewarding aspects of being in a Denver band?

AG: The Denver music community is amazing. Denver is growing as a city, and the music scene keeps getting more and more national exposure. Still, it’s incredibly welcoming. There are so many venues and bands, so you’d think there would be such a competitive vibe. But it’s so welcoming and warm. People really support each other and getting a bear hug from a musician you look up to and respect in your own city is very cool.

MHF: What are some of the biggest challenges?

AG: We are older than the average local band, and that comes with chaos in the form of kiddos, business travel, families, PhDs and even Michael’s tireless work fighting the good fight in the environmental community. All that means… time is not on our side. So, we sometimes write solo in any spare time we have, or favor practice over sleep. But, in a way, it makes it all the more special.

MHF: What, outside of music, brings you creative joy and serves as an artistic outlet?

AG: Courtney is most creative outside of the band. She’s working on a cool stop-motion video right now for us, and builds amazing projects in the name of science education, or any event she can get her hands on. I love volunteering with Girls Rock Denver. Those girls are AMAZING! Michael’s creativity outside of the band is most likely rooted in dinosaur stories to his extremely inquisitive toddlers. And if you need a laugh, Ryan and Glenn can dish out Seinfeld one liners until the end of time.

MHF: How did the band get involved with the show at Hi Dive next week?

AG: We are thrilled for this show! Nick Sullivan reached out to us because he had a hunch that we’d bond with Avifauna. Just like usual, boy was Nick right. They are so cool, and we are thrilled to support them in releasing their EP.  Then we learned that SIR was headlining which makes the night that much more special. Courtney will be out of town for the show, but we couldn’t pass it up. So we decided to make something special out of missing her voice, violin, keys, accordion and Science Minute with Courtney so badly. The powerhouse of lady, Brianna Straut, will be sitting in with us for a handful of songs… those pipes! We are also really excited about how creative we had to get with Science Minute with Courtney…. You’ll see! The cherry on top is that Girls Rock Denver will be there, as well, selling merch. With three female-fronted bands on the bill, we couldn’t resist. It’s going to be a fun night for sure!

Be sure to catch SIR, Avifauna and Automatic Iris at Hi Dive on Thursday 4/27, 7pm. 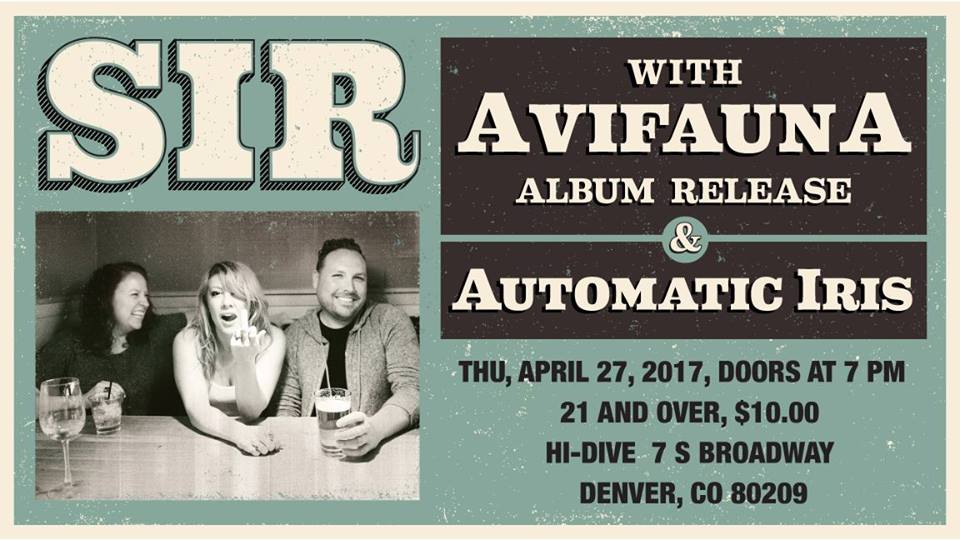