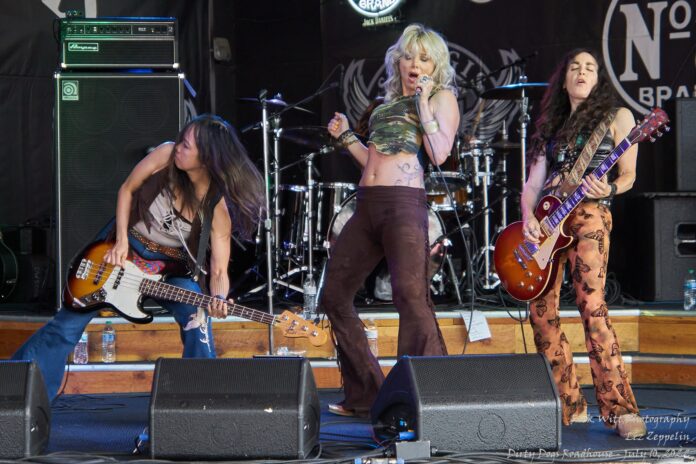 Lez Zeppelin, the “she-incarnation” of the legendary Led Zeppelin, played the second of two shows at Dirty Dogs Roadhouse in Golden yesterday afternoon. The prior afternoon they had opened for Molly Hatchet.  On Sunday, the stage was all theirs.  Playing a free (and generally unadvertised) hour and a half show in the middle of a hot July afternoon was an awesome testament to how much this quartet loves bringing this timeless music to the faithful.

Yesterday’s set was full-tilt from the word go – from the opening “Communication Breakdown” to the encore of “Whole Lotta Love”. When Lez Zeppelin played the Bluebird last April, they included an acoustic interlude where guitarist Steph Paynes, lead singer Marlain Angelides, and bass player/keyboardist Joan Chew took seats on stools for a three-song mini-set. There was nothing remotely close yesterday, as the band powered through a 15-song pure rock set that included crowd favorite after crowd favorite. 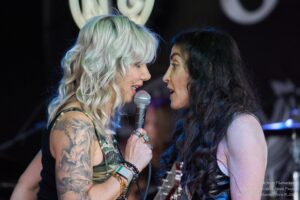 Before talking more about the show, I need to give a shout-out to the venue.  This was my first visit to Dirty Dogs Roadhouse, and it was impressive. The outdoor stage was perfectly situated for viewing from multiple sections of the venue, whether you wanted to be right up front, off to the side, or in the elevated section straightaway.  All of the viewing sections are covered, and the stage setup was impressive with the elevated drum kit.  Drummers tend to get lost in the background at most venues, but the stage setup here afforded a much better viewing experience.

As noted in my review of the band’s April show at the Bluebird, there are a lot of Led Zeppelin “cover” bands making the rounds these days and they are all talented, and worth the watch. For my money, however, none of them match the look, feel and sound of Lez Zeppelin. Founded in 2004 by Steph Paynes, the band has spent the last 18 years presenting the music of Led Zeppelin to national and international audiences large and small.  Great pride is taken in the manner in which they manage to faithfully present the music of Led Zeppelin while infusing their own exceptional talent and stylings into that presentation. 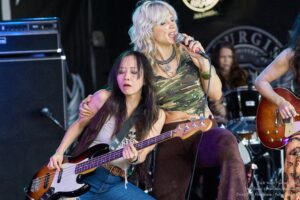 Yesterday’s set included an amazing collection of Zeppelin classics, including “Good Times, Bad Times”, “The Ocean”, “Heartbreaker”, “The Rover”, “Immigrant Song”, Black Dog” and Rock and Roll”.  Those last three songs formed a powerful trio that closed the regular set, before the band concluded with the aforementioned encore of “Whole Lotta Love”.

The energy of the band was incredible, especially when considering the heat of the day.  I asked Steph Paynes after the show how they managed to pull off such a high-energy set given the temperature, and she just smiled and shrugged, noting that “It really wasn’t that hot up on the stage”.  I guess maybe that’s how it is when you’re in the zone they were in.

Every member of the band was in exceptional form. Paynes’ ability to channel Jimmy Page, both musically and in stage presence, is a joy to behold. The same is true of Angelides, who is a truly gifted vocalist and front-person. Chew plays multiple roles in the band, and not just because she plays multiple instruments.  At times she’s the stoic bass player standing off to the side, at other times she’s incredibly animated and expressive. Whether playing bass, keyboards, or the occasional mandolin (though not at this show), she’s extremely talented. Enough can’t be said about the terrific Leesa Harrington-Squyres on drums. It’s no secret that the great John Bonham is my all-time favorite rock drummer and Harrington-Squyres channels his playing extraordinarily well (which is far from an easy thing to do). 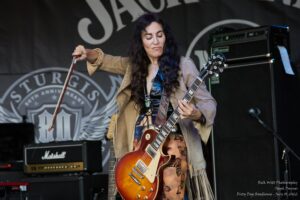 As impressive as the musicianship and the music itself was, perhaps the thing I enjoyed most about this particular set was the band’s playfulness, and the interplay between them. At one point, as a motorcycle was loudly leaving the parking lot between songs, Paynes playfully waved and called, “goodbye”. Multiple times throughout the set various members of the band smiled and responded to comments from the crowd, creating an intimate atmosphere that everyone connected with. Then there’s the classic rock star posing – Chew and Angelides, Angelides and Paynes, Paynes and Chew, and even Paynes stepping up to the elevated drum stage to more directly interact with Harrington-Squyres. It was just energizing to see how much fun the members of the band were having together.

All in all, another terrific performance by a must-see band, playing must-hear music. Following this gig, the band returns home for a brief break before heading off to Australia. They return to the U.S. for a series of east coast dates in August, running through November. A date isn’t set yet for a return to Colorado, but when they do return, you would do yourself a big favor by checking them out live. Stay tuned to Denver Entertainment Hub – we’ll let you know when they’re scheduled to return, as soon as we hear.