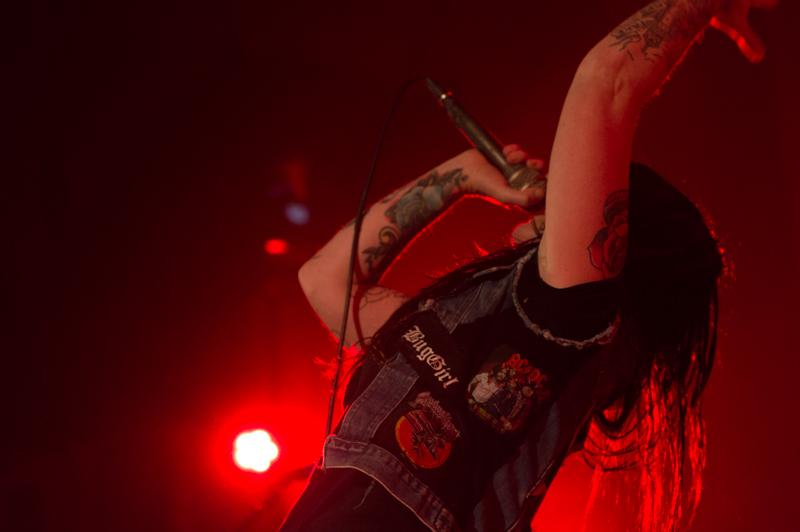 Warning: This article is a total first person geek-out moment.

As a photographer and writer, I get the opportunity to go to some awesome shows. From each venue, to the fans, to the musicians playing, every experience is unique and offers not only a personally gratifying opportunity but also the chance to capture something for the fans and artists. Arguably, from what seems to be since birth, I have been a fan of music. There are very few genres and styles I don’t like and few concerts or festivals I haven’t enjoyed. However, there are definitely some that stand out as being favorites, and Friday night at The Oriental, I had one of those nights. Knowing I was seeing Hell’s Belles, an “all-female AC/DC cover-band”, I admittedly went in with a few expectations. I anticipated an awesome light show with heavy guitar shredding, a niche market of fans and some badass ladies that put on a good show. While all of my assumptions were correct, I was blown away with witnessing so much more.

The first opening band, The Sparkle Jetts, were definitely the right choice to get the night kicked off. They were able to get the small yet growing audience out of their chairs and down on the floor to dance and get the buzz growing. Next, there was the extremely energetic Hot Apostles, enmeshing a bouncing rhythmic rock bass with enchanting vocals. Again, a solid performance by a classic rock touch that any local Denver metal fan should seek out.

As the night progressed and the Hot Apostles wrapped up, the lower level standing room only area in front of the stage was beginning to fill. In my experience, this means once the headliners arrive on stage there would be no room for me to wiggle in; I had to snag my spot now. I was fortunate enough to find my way next to Mike, a once upon a time casual attendant at a show of Hell’s Belles 10 years ago. He shared with me his story; he thought it would be an entertaining night of songs that he recognized and kind of a cool thing to do with his daughter, who was 16 at the time. Now 26, his daughter Kylie and himself were now at their countless performance and attempting to fill me in on what I was about to experience. They have seen the Hell’s Belles each time they come through town, making sure to catch them after the performance for a catch-up chat, and had more information on the band mates than I could even wrap my head around. Names of AC/DC band members along with Hell’s Belles band members were starting to melt together and I was unsure at this point who I was going to be seeing… And then they entered the stage.

In a shy and demure manor, they strap on their guitars, move around their mic stands and take time to work out the drum set rearranging. I honestly wouldn’t have guessed these women were in the band if it weren’t for the audience shouting out their names and confessing their love from the start. Mike pointed out each band member, reminding me of what position or character they played, and made sure to let me know who was new vs who was a veteran. Judy Cocuzza, the drummer that plays “Phil Rudd” had been tapping each symbol and drum head, ensuring their accurate distance and resonation. Sharon Needles, a part time “Malcom”, walked on with Mandy Reed, the full time “Cliff”. Next we saw Australia’s Amber Saxon, who would be our lead singer for the evening. And finally, from the opposite end of the stage enters Adrian Conner, who is to lead guitar as “Angus”. To see and hear the excitement from not only Mike and Kylie, but the rest of the audience, I was feeling like this could definitely be worth the front row squish.

Once they started, it was song after recognizable song, executed to damn near perfection. One could easily forget this is a tribute band and honestly be entertained by true and genuine talented musicians. Judy on drums kept then energy alive while Mandy and Sharon offered great guitar skills with rounded back-up singing. Amber’s vocals were spot on and transported you to a time of sex, drugs, and rock and roll, not missing a single note or inflection. And, of course, there’s Adrian, who’s onstage performance as well as impeccable shredding skills are absolutely unmatched. From the devil horn shaped hands in the air to the flashing devil horns headbands, this was a visit to sin city. Just around the corner from happy hours and dainty dishes, this was not your traditional Friday night in the Highlands, and I was so grateful for it. Headbanging, shouts of marriage proposals and chants of more in between each song made it a downright enjoyable experience for all involved.

After the demanded encore was finished, I was met with a “SO!?” look from Mike and Kylie, and I had to admit this was definitely a show I would see again. As I packed up my gear and headed for the door, I not only “liked” the Hell’s Belles on Facebook, I shuffled AC/DC playlists on my drive home. That, in my mind, is how a millennial would mark being a new fan.