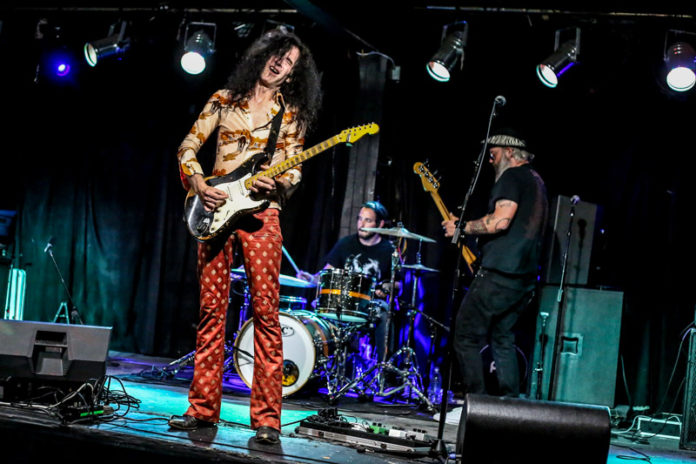 Herman’s Hideaway hosted a party on Wednesday, bringing in Blues Legend Leroy Miller and two newer Denver bands. Wookiee & The Rosebuds, sisters Eternity & Felicity Peckman, had their first show ever and were happy to be playing at a venue with such a rich and long history.

Wookiee & The Rosebuds sang original songs that included Paralyzed, What We Thought, Castle, Too Far Gone, and The Ground I Walk On. Wookiee & The Rosebuds took listeners on a ride through sad and break up tunes. Lead singer Eternity showcased her strong voice through the emotional set. They got crowd participation on Slow Songs, which was actually one of their more up-beat songs, then followed up with another downer, Cry. They also played The Song With No Title, and got cheered when then told fans they were going to finish up their set with Our Own Galaxy. So as Wookiee & The Rosebuds is a new band, they have fans that already know their music. What a cool vibe. Check their website for more information; https://www.wookieerosebudsofficial.com.

Immigrant’s Child, an indie/alternative rock band, was up next. Immigrants Child had Keeana and Jessica as forceful vocalists, Josiah on bass, Mario on lead guitar, and Brenden on drums. Powering through songs about self-reflection and finding oneself, Immigrant’s Child put on a rocking show with tunes such as, He Doesn’t Miss You, To The Moon, Early Morning Afternoon, and Keep You Around.

Since leaving L.A. a few years ago, Leroy Miller has things figured out. He has songs on TV shows and movies, and he left some leeches and has built himself a house in the middle of nowhere. Well, it’s not really nowhere, but it is pretty much off the grid in Montana. Miller has found time and space for his latest release, Let It Ride. Miller gets down and dirty and explains that you ain’t got nothing if you Ain’t Got The Blues.

Supported by Dan Rutt on drums, and Adam Rutt on bass, Miller cruised through Blues/Rock tunes with as gritty an attitude as a voice. Miller writes relatable songs about his life and his environment and shares his stories through his music. Miller came to pull you in. Montucky Blues was a rocking tune about curing some cabin fever and surviving everyday. Other songs included Dead Man Walking, Blue, One More Night, and Ricochet. You’re know you’re in for it when Miller gets his pinky fingers going with solid guitar playing.

Like all good Blues bands, they gotta keep moving it Down the Road and have a full tour going this summer. If they stop by your area, go see Leroy Miller. If they aren’t stopping in your town, take a road trip to the nearest stop. Leroy Miller and his band are definitely a Good Time. Another important part of the team is Louie. He serves as tour manager, bus driver, mechanic, merch sales, and security. Don’t mess with that guy. Check leroymillermusic.com/ for more information.